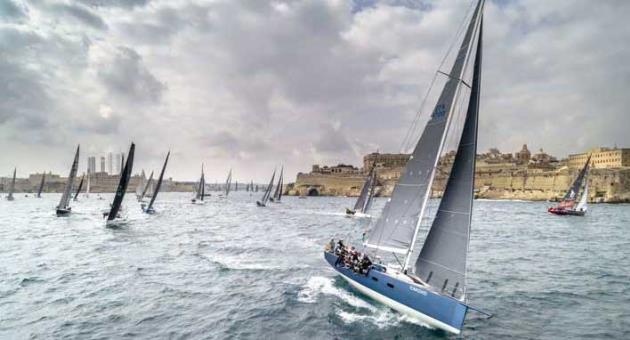 The annual Rolex Middle Sea Race is highly rated as a must-do and must-see race, which kicks off in Valletta’s majestic Grand Harbour. Every year the race takes place in mid October, so book your stay in Valletta to witness the spectacular international fleet set sail in the Mediterranean. The sight of sleek yachts sailing around the majestic bastions is definitely something you need to tick off your bucket list!

A challenging racecourse – The racecourse, often described as the most beautiful in the world, begins underneath the historic Fort St Angelo and Saluting Battery in Valletta, before heading northeast along the coast of Sicily, towards the Straits of Messina. Along the way, the International fleet will usually be able to see and hear the rumbling Mount Etna in Sicily, before continuing on its course towards Stromboli, another active volcano. Next, the fleet turns left towards the Aegean Islands until reaching the island of Favignana. After reaching this point, they will turn south towards Lampedusa, passing the island of Pantelleria, before returning towards the Marsamxett Harbour in Malta.

The origins of the Middle Sea Race – The challenging course has attracted hundreds of sailors from all over the world, since its first edition in 1968. The race was co-founded by the Royal Malta Yacht Club and the Royal Ocean Racing Club in a bid to test the skills of two rival members of the clubs.

Held in October, crews and skippers need to be on their A-game to overcome to changeable weather conditions at sea. The exciting race has been held annually ever since, except for a brief break between 1984 and 1995. Last year saw over 120 crews from more than 30 countries meeting in the Mediterranean Sea for the race, and the current record stands at 47 hours and 55 minutes.