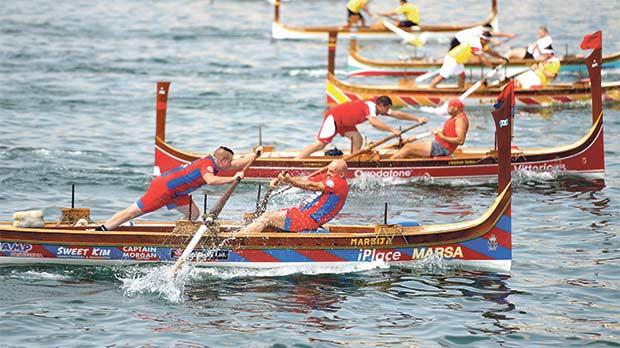 The Regatta is a Traditional Rowing Event that has been held in Malta since the middle ages. The first professional Rowing Challenge started in 1955.

The traditional Regatta races are national events held twice yearly, that on the 31st of March on Freedom Day to commemorate the withdrawal of the British troops and the Royal Navy from Malta in 1979, and 8th September known as Victory Day. The latter has several roots as it marks the end of the Great Siege of Malta in 1565 and the end of French occupation on Malta in 1800, as well as the armistice of the Fascist regime in Italy in 1943, which saw the close of the Italian bombardment of the Maltese Islands.

The programme offers four to five hours of spectacle, with the best crews forming part of the rowing teams from the cities bordering the Grand Harbour. Cospicua, Kalkara, Marsa, Marsamxett (Valletta), Senglea, Vittoriosa and also Birzebbuga, participate in 10 races under two different categories using typical traditional Maltese boats like the ‘frejgatini’, ‘kajjikki’ and ‘dghajjes tal-pass and tal-midalji’. These boats were traditionally normal working watercraft which plied the local harbour.
Over the years these boats have evolved into racing craft with certain modifications. These are also examined and weighed before the start of and end of the races. The first three placings in each race are awarded a number of points and at the end of the Regatta, the club with the highest number of points, in the respective categories, is presented with the Aggregrate Shield.

In the past small flags in different colours were tied to the forestems of racing boats for purposes of recognition. The colours were allotted by the Collector of Customs. Colours have changed considerably over the years. Today the clubs can be recognised by their traditional colours which include Birzebbuga (Red-White-Blue), Cospicua (Light Blue), Kalkara (Green), Marsa (Red-Blue), Marsamxett (Valletta) (Yellow), Senglea (Red-Yellow), and Vittoriosa (Red).

The 1,040 metre race course is set up in the Valletta Grand Harbour where the magnificent Fort St Angelo provides an imposing backdrop to the sleek and colourful Maltese boats. A good crowd of spectators and supporters converge along the waterfront and the surrounding bastions to watch the races, which is sure to be a colourful and spectacular event worth watching. The races can be viewed from the water edge of the three cities (Birgu, Cospicua, and Senglea) or Valletta.